David, the Trinity and new shoes.

Our day started out early again, with Accademia and David first on the list.  Probably the highlight of our trip!  Our Firenze Card made something possible that otherwise would never have happened!  Because we had the card, we didn’t have to make an appointment to get inside, nor did we have to buy a ticket.  Everyone else has to 1.  Make an appointment, and 2.  Stand in line at the appointed time to pay for their tickets.  The really LONG hours-long line is for those without appointments.  While everyone else was purchasing their tickets, Tony and I walked right in, as soon as the gallery opened.  We had at least 3 minutes ALONE WITH DAVID!  If you’ve ever seen pictures, the hallway is usually packed with people trying to see him.  It was surreal!  We knew to make a beeline for the David soon as we got in, and look at “the Prisoners” by Michelangelo afterward.  Too bad photography isn’t allowed inside the gallery.

After Accademia, we headed across the Arno River for the Brancacci Chapel.  This ended up being Masaccio day for us.  We saw his “Adam and Eve Banished from Eden” and “Tribute Money” frescos.  That was about all I was interested in, to be honest, and what led me to walk all the way across to the other side of the river to see.  We were finished with the first 2 sites well before lunch and getting hungry, but the restaurants here don’t open till noon, so we headed towards the Medici Chapel to have lunch in the neighborhood of our next destination.  Upon getting there, we decided to go inside and have lunch afterward.  The Medici Chapel is impressive!  Totally wallpapered with ornate stone.  The alter was covered with scaffolding, but WOW!  Our main goal, was Michelangelo’s New Sacristy, The tombs of some of the most important Medici.  His statues that represented Day, Night, Dawn and Dusk are here, along with the “Medici Madonna” on the unfinished Lorenzo the Magnificant’s tomb – the Medici who took Michelangelo in as a 13-year old boy and raised him as his own son.

We had lunch in the restaurant across the street from the chapel, a touristy place with a friendly waiter and “ok” food for high prices.  Tony had Carbanara, something he’s been waiting to try, and I had gnocchi with pesto.  I think Tony’s was best, but he really liked what I had, we spent the whole meal eating off each others plates.

After lunch, we headed for Santa Maria Novella church, for more Masaccio – The Trinity.  This was on my “Must See” list for Florence.  After inventing linear perspective, Brunelleschi taught it to his friend Masaccio to apply in his paintings.  The architectural inspiration is very obvious by the arch behind God, Jesus, and the Holy Spirit, in this awe inspiring fresco.  I’ve always been attracted to this one because of the colors – not bright, but very pretty.  Lots of pink; I wonder if it started out as red.  And also the architecture details in the arch are very realistic.  I saw two of my “biggies” today!  The Trinity and David.

We walked across the street to the train station so I can find the ticket machines and understand the line layout.  We’re heading to Pisa tomorrow for the day, and I don’t want to be lost trying to figure the train station out early in the morning.  I think I had it figured out, so we headed back to the hotel around 2:30, after spending all morning on our feet.  A few hours break, then we’re off to the Medici Palace just a few doors down from our hotel – this is where Michelangelo lived with his adoptive family.  I learned to day that the hotel is a former palace occupied by a Medici relative – the crest still hangs above the entryway to the hotel. 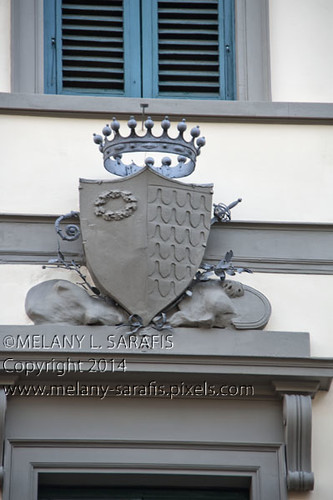 I’m glad we didn’t have to walk far or wait long for the Medici Palace – sort of a disappointment.  The courtyard was interesting, but the rest was sort of zzzzz.  It was fun to imagine teenage Michelangelo sitting on the windowsills or in the courtyard, talking to Botticelli.  It started raining soon as we came out, we bought a purple umbrella from a street vender and headed down for dinner and our final destination for use with the Firenze Card – “The Springtime of the Renaissance”, a special temporary exhibition that has some really cool pieces from Ghiberti, Brunelleschi, Lots of Donatello, some Michelozzo, Masaccio (!), and Lippi.

We had dinner at a nice restaurant, La Grotta Guelfa, and sat outside under an old arcade, sheltered from the rain.  The temperature had cooled off a lot, a breeze felt good, and it was nice to watch the rain, as I drank wine and ate Carbanara (my turn!) and Tony had Arrabiatta (spicy spaghetti).  A very nice, relaxing dinner.

The Springtime of the Renaissance show was very worthwhile!  Much of this stuff is on loan from the Louvre (thanks to Napoleon, who stole it from Florence and took it to France).  The Submissions for the baptistery door completion from Brunelleschi and Ghiberti (won by Ghiberti) were there.  They were supposed to be in another gallery here in Florence, but only a photo was there instead, we were surprised to see them there.  Donatello’s bronzes were amazing!  Many original pieces that were originally from the Orsenmichele (where we went on day 1) were here.  I learned something cool!  I knew that Filippo Lippi was a Monk (and not a very good one) who had some kids with a Nun (LOL) but I didn’t know he was a Monk at the Santa Maria del Carmine church where the Brancacci Chapel is.  He met Masaccio there while still a monk and Masaccio was working on his frescos.  Pretty cool!  Photography wasn’t allowed in this exhibit, DARN!

As usual, we looked for Gelato on our way back to the hotel, and found Grom, one of the best-rated gelaterias in Florence.  I had apricot (yum!)  Tony got ½ apricot and ½ lemon – too lemony for me, but he liked it. 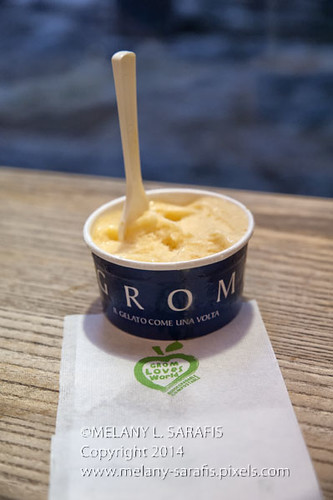 We’re back in our room now, getting ready for another day tomorrow.  Our next destination:  PISA to climb the tower.  (Ug, another climb)